Over 150 people packed the church at the final service of celebration and thanksgiving for the 122 years of worship and mission at Villa Road Methodist Church since its opening on 19th July 1900. At the opening celebrations the preaching and worship continued throughout the day.

At the final service in July 2022, the church filled with people of all ages coming to share their memories, testimonies and offer tributes along with songs, poems and reflections lasted over two hours followed by a Caribbean style buffet and social gathering until 9pm. 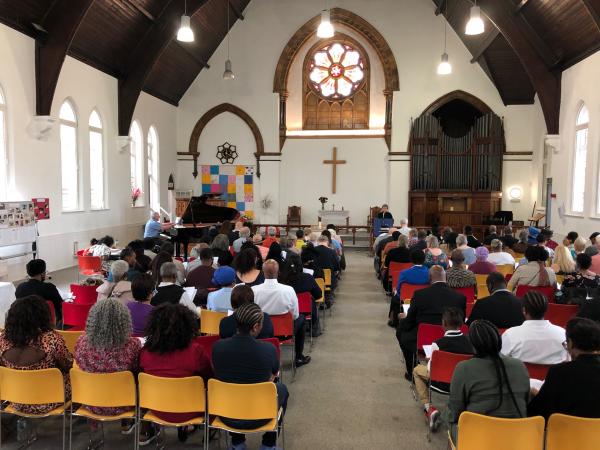 The service of celebration was led by Revd Alison Richards with the opening words “In Christ we are built together into the dwelling place of God.” The first hymn, Great is thy faithfulness was accompanied on the grand piano by Mr Irving Horne. Judith McCullam and her sister Maxine, followed with a tribute and led us in the hymn O Happy Day. The Old Testament lesson, Isaiah 66:1-3 was read by Alecia Gava and the Gospel reading, John 14:12-17, by her sister, Rubyrose Gava. They were both commended by Miss Elspeth Insch, the former headteacher of King Edwards Girls’ Grammar School, for their excellent reading of the Bible passages.

Andrew and Jane Lee, who have been church members for over 40 years, took us through some of the history of the church. The Methodist people at Unett Street Methodist Church in the Methodist New Connexion had a vision to build a new church on a prominent site here at Villa Road. As you walk up the long flight of steps into the church, there are foundation stones laid in the wall commemorating the building of the church in October 23rd 1989, by Mr E.E. Rogers, Mr T. Holcroft, Mr Josiah Cox and the architect John C. Dunn.

Methodism was growing rapidly in Handsworth in the late 19th Century with churches on almost every street corner including Mansfield Rd, Rookery Rd, Somerset Rd, Lozells St and George St (where Aston Villa Football Club had its beginnings). Villa Road Methodist Church was part of the New Connexion which had sites in Whitefield Rd and Hamstead Rd. It was not until 1932 that the Methodist Union brought most of the Methodist Churches together.

The new Handsworth Theological College was built in 1881 after a decision by the World Methodist Conference in 1868 and continued as a theological college until 1970. We celebrate those days gone by and thank God for the gospel message and influence that Methodism has had in people’s lives over the centuries.

Miss Insch, the headteacher at the Grammar School from1992 to 2012, opened the celebrations as she was instrumental in the purchase of the building in 2004 by the King Edward VI Grammar Schools Trust and in its major renovation into a Music Centre for the school. She shared some of her early memories of attending a Methodist Sunday School in Leicester which led to a deep connection with the Methodist Church. As headteacher, she was able to help the church to continue to worship for the next 18 years in the newly renovated space.

Mr Hilton Somersall then shared his memories of arriving in the UK in 1955 as a young man from the Caribbean Island of St Kitts, filled with hope and a vocation to preach the gospel. He found a welcome at Villa Road Methodist Church. He was surprised to find the congregation was only 15 people when he had been used to a full church back home. 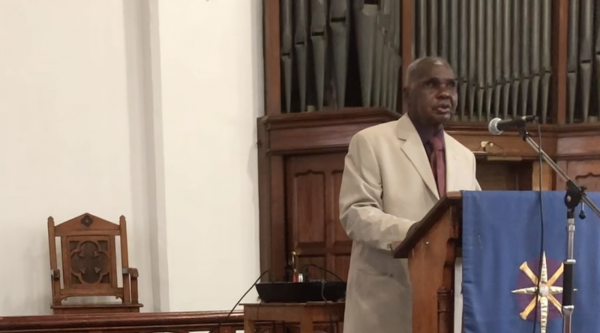 However, over the next few years the church grew to 75 members, as people from Jamaica, St. Kitts, Trinidad, Ghana, Nigeria, the Gambia, Zimbabwe and other countries joined the congregation. Mr Somersall, a Methodist Local Preacher for 65 years, gave a word of hope and encouragement and led us in singing an old hymn from the past ‘Steal away, steal away, steal away to Jesus.’

Testimonies were given by many people including a message read by Beverly Waul from Mrs Syble Morgan, Senior Church Steward at Villa Road, who is now living in London. The Revd Arnold Dixon spoke about his mother, Mrs Eleth Dixon, who was a Church Steward for many years. Family tributes were given by Dawn Johnson and the family of Miss Vicky Clarke;  Yvonne Taylor, daughter of Mrs Genevieve Taylor; Carole Phillips daughter of Mrs Meva Phillips; Tony Thompson, son of Mr Stanley Thompson; Jacqui Reid daughter of Mrs Daphne Reid and a message was read from Jenny Blackaby. 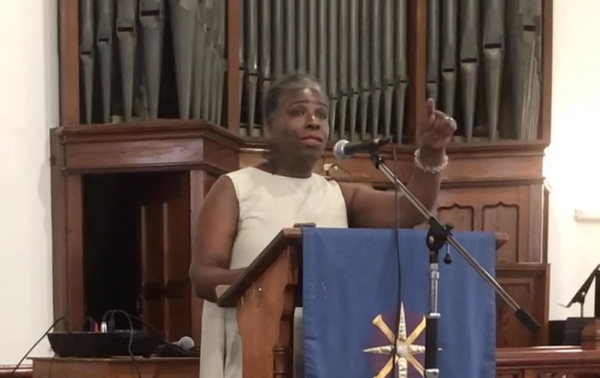 We were delighted to have members of The United Pentecostal Church of God join us for the service. Pastor Gibbons has been a good friend to us over the years and the two churches have had a long-standing relationship with both meeting in the same building on a Sunday. Pastor Blake gave an uplifting tribute and the choir sang a hymn as an encouragement to trust in God that we will meet again.

Ivan Henry gave a testimony to the work of the Handsworth Employment Scheme that was initiated at Villa Road Methodist Church. We remembered the support and outreach into the community that the church was involved in. Time was running short as the food had arrived so sadly we had to ask the Ministers present to keep their contributions brief, which they all managed to do!

Testimonies were received from Revd David Meachem about his father, Revd Tom Meachem, who served from 1958 - 1963 and then from Revd Michael Ward and his wife Christine who were at Villa Road from 1969 - 1976. They recalled the Harvest service when they realised there was something wrong with the piano. They discovered ham sandwiches inside it from the harvest supper the night before and realised that they needed to do things differently. The next year they changed the food to Caribbean rice and peas and jerk chicken. The ladies of the church prepared the food and transported it in three car loads from their homes and there were no left overs afterwards! Michael ran a youth club from the church and remembers wonderful trips with the young people to Combe Martin in Devon.

Revd Ruth Child, daughter of Revd Gordon and Frances Squire, Minister from 1976 - 1983, gave a testimony to the time she spent as a child at Villa Road, followed by Revd Liz Wills who was Minister from 1998 - 2005 and then Revd Helen Jobling and Revd Bob Cooper from 2010 - 2017.  We had hoped to connect with Graecia Tawiah in Ghana by phone but unfortunately Helen was unable to get through. Graecia was a long-standing member at Villa Road Methodist Church and continued to support the church after she left the UK and through her generosity, enabled it to continue for the last five years. 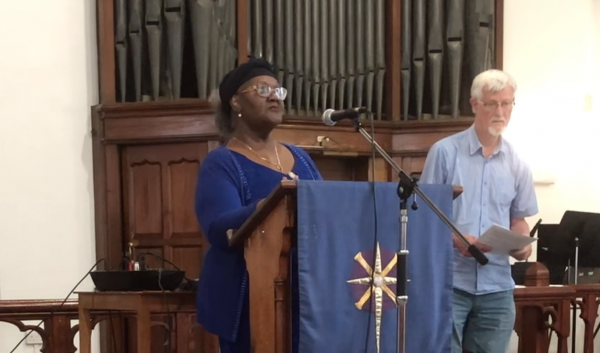 We also had a message from Revd Donald Sampson and his wife, Annette, who sadly were unable to be with us but remembered their visits to Villa Road to preach. Donald would often visit the Sikh Gurdwara, Guru Nanak Nishkam Sewak Jatha, next door, to pray before coming to lead the service at 11am on the Sunday morning.

It was good to have Amrick Singh Ubhi, Director of the Nishkam Centre and our neighbour from the Gurdwara join us at the thanksgiving service. It was through his networking that we were able to reconnect with Miss Insch and invite her to the service. 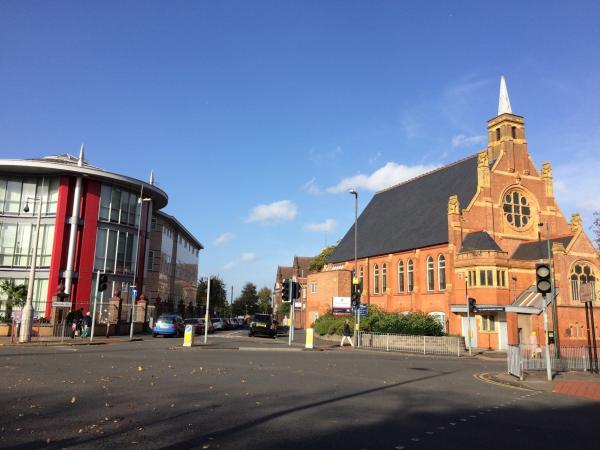 The service ended with tributes from David and Abigail Gava and their children. Alecia read an acrostic poem that she had written about Villa Road Methodist Church; Dwayne gave a demonstration of his football skills and Monique and Rubyrose sang their favourite hymn, “The Lord’s my Shepherd” by Stuart Townend.

A very poignant moment was spent as we remembered our loved ones who have gone to glory, especially since the beginning of the Covid pandemic in March 2020. Beverly Waul read out their names and candles were lit by Monique Gava. They have joined the company of heaven, yet their faith and love continues to inspire us today.

The closing hymn ‘How Great thou art’, was led by Abigail Gava who sang in Shona and then the congregation joined in with the chorus in English. The final words of dismissal after the blessing were led by the Minister: “We go in peace for God’ Spirit dwells in us” and the congregation responded: “We will be a temple of God wherever we go”

The building may be closing but God’s Spirit lives on in the remaining members of the church whose membership will move to new churches. The Gava family are now attending South Yardley Methodist Church and Andrew and Jane Lee move to Boldmere Methodist Church in Sutton Coldfield.

The celebrations continued with wonderful Caribbean food being served by Naomi and her team from NCS Catering Ltd and lots of conversations followed. It was good to see old friends and people connected with the church; to remember the happy times and to meet up with people we had not seen in years. We especially appreciated Mr Bill Scott coming to the service from Scott Funeral Directors who had taken many Caribbean style funerals for the families in Handsworth over the years with his calm, caring and professional approach.

We were delighted that so many people came to share together in this special service of thanksgiving. It would have been wonderful to have heard more stories from other people in the congregation. We thanked Revd Anne Smith, the Birmingham District Assistant Chair for attending and also were very moved to have Professor Anthony Reddie join us. Now the Director of the Oxford Centre for Religion and Culture, Anthony had been a youth leader at Villa Road Methodist Church, before continuing his journey, into education and practical theology, with a scholarship in Black Theology.