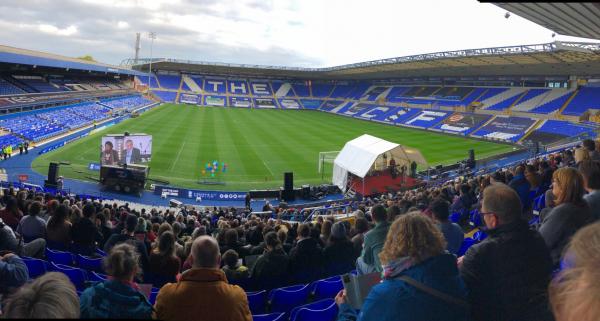 On Sunday the 17th of October (the day before Anti-Slavery Day 2021) the Time4Change collective hosted a united service at St Andrew’s Stadium to acknowledge the sins of racism of the past and present, and to commit to building a united welcoming Church to serve Birmingham.

Around 1,500 people from across Birmingham attended. Among the congregation were up to 100 leaders from the city’s churches, including senior leaders from both historic and Black-led Churches. Sung worship was facilitated by (among others) Tim Hughes and a group from the New Jerusalem Community Church based in Aston. Leaders from different Churches brought reflections and led prayers. The Saltmine Theatre Company presented a relevant drama based on the theme of resurrection. Pastor Calvin Young (Mount Zion Community Church) presented a call for future unity among Birmingham’s Church leaders and church members.

There was a considerable representation of believers from the Birmingham Methodist district and circuit.

Using videos, live worship, a piece of drama, spoken testimony and prayer, the service helped shine a light on the racism hardwired into Birmingham's history and the fact that many churches have in the past NOT been beacons of light, acceptance and inclusion but rather churches have been communities that failed time and time again to treat people with equity, compassion and respect.
/
John Wesley's 80 page 'Thoughts on Slavery' was mentioned a number of times during the event (you can read it here) and it proves that in the 18th century there were voices which spoke out against the evil of slavery and called into question the faith of those who perpetrated it.
Wesley writes: What is your heart made of? Is there no such principle as compassion there? Do you never feel another's pain?
Have you no sympathy? No sense of human woe? No pity for the miserable? When you saw the flowing eyes, the heaving breasts,
the bleeding sides and tortured limbs of your fellow-creatures, was you a stone, or a brute?
The event provided time and space to kickstart the process of repentance and forgiveness and ended with a vision for future cooperation and unity among Christians throughout Birmingham.
/
Time4Change have provided Service and Sermon resources for churches who want to continue a journey of repentance, reconciliation and reparation.